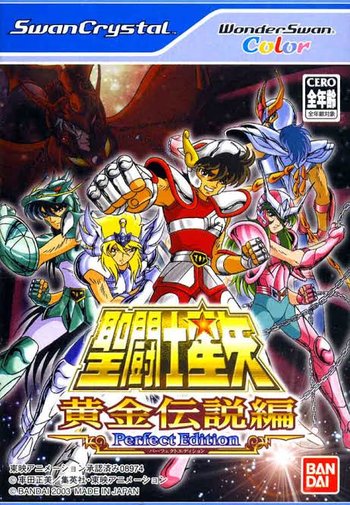 Saint Seiya: Ougon Densetsu ("Gold Legend") is a platformer-slash-RPG game developed by TOSE and published by Bandai, released in 1987 for the NES, and the very first game based on the Saint Seiya manga/anime. It implements a rather primitive (and sloppy) RPG system with platforming sections, where the player (using Pegasus Seiya) moves around the city, talking to NPC or throwing punches at mooks and gaining experience which can be distributed across several stats which determines strength, defense and Cosmo. When fighting bosses, the game switches to turn-based combat: here the player assigns an amount of strength to each stat and selects an attack and defense option, then watches as the attack animations play out.

The game follows the first story arc of the anime, albeit very haphazardly: throwing several characters away and including clones of the same enemy saints to pad its length out. It also ran out of material to adapt half-way through the Twelve Temples arc, leaving most of the latter Gold Saints out and heavily changing the ending.

The game received a sequel in 1988 for the same system, Saint Seiya: Ougon Densetsu Kanketsu Hen ("Gold Legend Finish Arc"), which went for a more simplified/streamlined gameplay: platforming sections are now much more straightforward and simple "left-to-right" ordeals, while turn-based elements were reduced to a single "Sevensenses" bar the player fills up by punching mooks, and later distributes among a Saint's "Life" and "Cosmo" before each boss fight. The boss fights are simply "pick up an attack" and "hope you can evade damage", with the many character stats and leveling up from the first game removed entirely. The game focus exclusively on the "Twelve Temples" part of the first arc, now adapted in its entirety and much more faithfully since that arc of the manga was finished, even encouraging the player to reproduce the battles as seen in the manga/anime.

Finally, a Remake combining both games was released in 2003 for the WonderSwan Color, titled Saint Seiya: Ougon Densetsu Hen Perfect Edition, taking and updating the combat system of the first game with a very welcome set of new graphics and cutscenes.