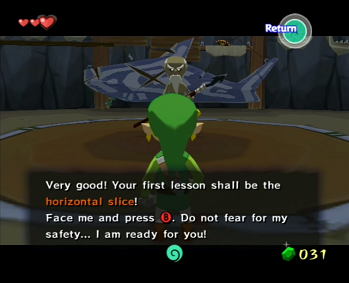 Area or location where the player can practice moves on a more or less unbeatable character. The usual experience isn't given, although a character may earn information or special items. You can't win the fight, and you can lose, although you are unlikely to be actually punished for losing.

If the player is forced to fight them at least twice, the character will get more difficult with each fight. Thus, it may become a Recurring Boss.

Contrast with the Training Dummy, which is an opponent that you can't lose against.

The Prowler serves as a tutorial to fighting as Starfishman, being the easiest boss in the game.

The Prowler serves as a tutorial to fighting as Starfishman, being the easiest boss in the game.