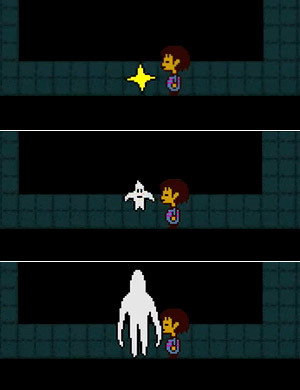 This does not fill you with determination.
Advertisement:

You are trudging through That One Level, the Elite Mooks have worn you down and you are almost out of Healing Potion. Finally, in the next hallway, you see the benign-looking statue that marks a Save Point! Here is a chance to save your progress, possibly restore your vitality and, if nothing else, catch a much-needed breather. You eagerly approach the statue and wait for its benevolent light to wash over you.

Instead you get blasted with an attack that drops your HP to 1 and disables all your Power Ups and Equipment. To top it all off, the statue transforms into a monster and gives chase.

You've fallen victim to a Treacherous Checkpoint, a subversion of the common Checkpoint or Save Point. It could be considered the opposite of a Healing Checkpoint (a Harming Checkpoint). It applies whenever the Checkpoint, which is usually always helpful to the player, becomes undesirable and better-avoided.

This trope is rare, mostly confined to Platform Hells, Deconstruction Games, and the nastiest of Nintendo Hard games. In the middle of a dungeon full of Malevolent Architecture and Everything Trying to Kill You the Save Point may be (metaphorically) the player's only friend. A symbolic betrayal by this last friend may drive an already-aggravated player to Rage Quit. But if used carefully, this can throw some Paranoia Fuel on an already-smoldering pyre: in a well-designed game a player expects the place where the game is saved to be, well, safe. When the game betrays this expectation it hammers in the dread that nowhere is safe.

Compare Poison Mushroom and Chest Monster, in which hazards and monsters are disguised as desirable items. This trope can overlap but does not need to. And a treacherous Check Point can feel much crueler than treacherous loot because, unless the game uses a Justified Save Point, it is not the characters within the game who are deceived: the player is betrayed.

See also Inn Security, especially if the Trauma Inn doubles as a Save Point.

For more on the paranoia-inducing nature of the subversion, compare Interface Screw and The Fourth Wall Will Not Protect You. The player naturally expects a game to challenge them with difficulty, even surprise. However it might be assumed that saving the game is merely a necessity of the medium, that the Save Point is in some sense outside the reality of the game and therefore off-limits for challenge. The game can rudely shock a player by revealing that it is not.

Contrast Point of No Return, a save point that may be ominous but not treacherous. If a fault in a game's checkpoint system makes it Unintentionally Unwinnable, it is a Game-Breaking Bug.