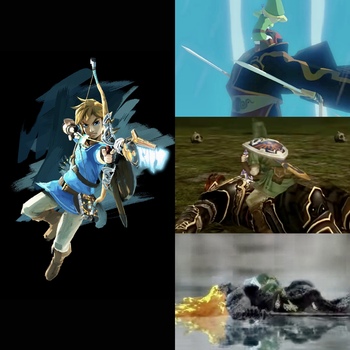 On the left is the hero of Hyrule's most recent reincarnation. On the right are just three of the numerous Big Bads he's vanquished. note Clockwise from the furthest left. Breath of the Wild, The Wind Waker, Twilight Princess, and Skyward Sword.
Flynn: Do you intend to rain down your justice on all the villains of the world? That's the behavior of a common criminal!
Yuri: I recognize it for what it is and I've made my choices. Murder is a crime.
Advertisement:
Flynn: And even knowing that, you intend to dirty your hands.
Yuri: Intend to? I already have.
— Tales of Vesperia

Villains dying in a story is nothing new. When it comes to villains, they're expected to lose, and dying at the hands of any character, whether or not they're The Hero, is common, especially in Darker and Edgier works. However, there are characters in existence that seem to make it a point to kill any villains that come their way. This is the Villain Killer.

This trope does not occur when a hero kills a singular Big Bad and his/her dragon at the end of a single story. This trope is about characters who regularly kill the villains more than other characters in the setting. In order for a character to become this trope, it should be one of the following scenarios:

In Lighter and Softer settings where characters have a Thou Shall Not Kill rule, preferring to imprison, disable, or redeem their adversaries, the Villain Killer is the one who defies this rule and executes the villains they come across. In these types of settings, this character is usually treated akin to the Token Evil Teammate.

Sister Trope to Vigilante Man, the main difference between the two is that a Villain Killer need not be motivated by a sense of justice, and a Vigilante Man may not end up actually killing their victims.

Naturally, as a Death Trope, there will be Spoilers ahead!

After going back into the past and dealing with the Cell Games, Trunks returns to his timeline far stronger and makes short work of the Androids.

After going back into the past and dealing with the Cell Games, Trunks returns to his timeline far stronger and makes short work of the Androids.