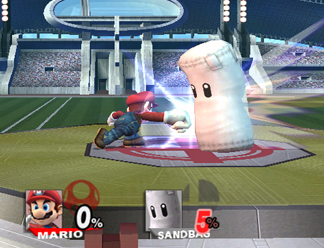 Almost makes you feel guilty beating up such a cute thing, doesn't it?
"Getting hit doesn't hurt Sandbag at all. As a matter of fact, it loves to see players wind up and let loose."
— Sandbag's trophy description, Super Smash Bros. Melee
Advertisement:

This is some typically immortal character that you can return to, to practice your moves on. You can't lose a fight against one, but in most cases, you can't really "win" the fight either. You decide when the fight is over.

Sometimes you can get rewards for getting high combos, involving keeping it in the air as long as possible. Other times it involves destroying the training dummy when it is not meant to be destroyed.

Training dummies usually make no effort to fight back. In cases where they do, you may also have the option to determine their behavior, whether it be defensive, offensive, or jump in place on one leg.

Contrast with the Training Boss, a training opponent that you can't win against but can lose to.