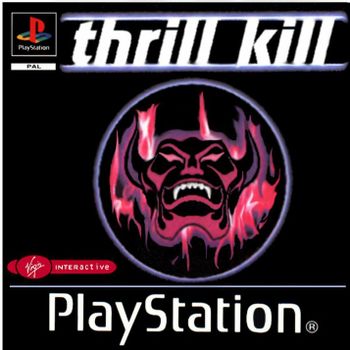 Thrill Kill is an unreleased ultra-violent fighting game for the Sony PlayStation. Set in an urban version of Hell, the characters were all incredibly evil mortals, damned for various atrocities, including murder. However, rather than being sent directly to their just deserts, they're able to fight each other for another chance in the mortal world, watched over by Marukka the Goddess of Secrets, who has organized the infernal tournament (simply because she's bored) and promised the winner reincarnation on Earth.

The game is notable for a number of reasons. The first is for having a four-way 3D battle system, something that had never been done to the fullest like this before. The game is also quite notable for the controversy surrounding it. The game's ultra violence and dark sadomasochistic themes caused it to get quite a bit of flack from Electronic Arts, who then-recently had bought the game's publisher, Virgin Interactive, and then forcibly shelved the game from release to avoid it tarnishing their image. EA also shot down any chance of the game getting a release by any other publisher, believing the game to be too violent to release. Thrill Kill is also notable for being one of the first video games to receive an AO (Adults Only) rating, though the rating never went to full use due to the game never being officially released.

Even though the game was officially unreleased, the developers leaked the game unto the Internet, allowing many people to find and download unfinished versions.