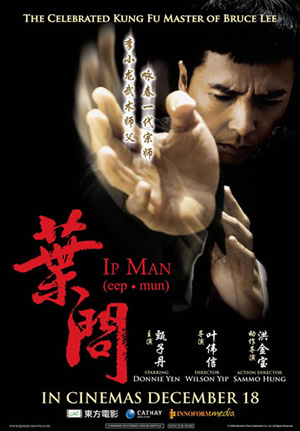 Ip Man is a 2008 Hong Kong martial arts film directed by Wilson Yip. It is very loosely based on the life of Bruce Lee's eponymous master, played by Donnie Yen, and the first installment of the Ip Man film series.

In 1935, Foshan, China is a place renowned for having a great number of martial arts schools. Ip Man is known to all as the greatest master in town, despite having no desire to take on students or test his art against rivals. Yet when a troupe of upstart Northerners successfully beats up the other local masters, it falls on Ip Man to defend Foshan's honor.

About one third into the film, the story skips ahead in time. Japan invades China in 1937, and occupies Foshan in October 1938. His mansion confiscated by the Japanese, Ip Man is forced to shovel coal to feed his family and learns of matches the Japanese are staging between their karate exponents and Foshan's former martial arts masters. When a friend's failure costs him his life, Ip Man's vengeful demolishing of ten Japanese pugilists draws the attention of the Japanese General Miura. Ip wants no more of it, but when a group of bandits threaten a friend's factory, some of whom are all too familiar, it starts a series of events that spiral to a final confrontation between Ip and Miura.