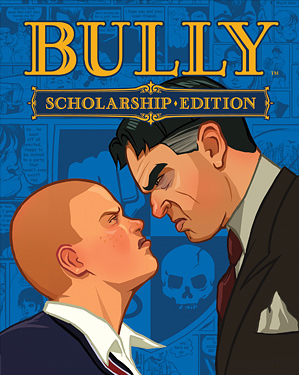 Canis Canem Edit.
"So here I am, at probably the worst school in the country, whose alumni are nothing but arms dealers, serial killers, and corporate lawyers. Real scum. And that old creep thinks he can tame me? We shall see, my friend. I only give people what they have coming to them."
— Jimmy Hopkins
Advertisement:

Bully is a 2006 video game by Rockstar Games for the PlayStation 2, combining the Wide-Open Sandbox gameplay of the Grand Theft Auto franchise with the fantasy of besting The Bully who made your own school years a living hell. In 2008, an Updated Re-release, Bully: Scholarship Edition, was released for the Xbox 360, PC and Wii. This version featured a few exclusive missions, extra classes, new outfits and some minor improvements to the graphics.

Our protagonist, James "Jimmy" Hopkins is a 15 year old boy with a checkered past, a head shaped like a potato, and a face like that of a bulldog chewing on a wasp. He's just been dropped off at a so-called "prestigious" school in New England while his serial divorcee of a mother and fourth stepfather depart for their honeymoon cruise. This is Bullworth Academy and, far from being a respected seat of learning, it is in reality the worst school in the entire country. Having been repeatedly expelled from past schools for various counts of vandalism, violence and insubordination, Bullworth is the last stop for Jimmy before he is landed on juvenile detention. Naturally, trouble finds him the moment he steps on campus, in the shape of deliquents always on the lookout for new kids to dunk into the toilet.

Only two kids at Bullworth are willing to befriend the freshman: well-meaning but effeminate pariah Petey Kowalski, and smart-talking sociopath Gary Smith. Jimmy soon discovers that Bullworth is in a state of constant turmoil due to the feuding of five cliques: the Bullies, the Nerds, the Preppies, the Greasers and the Jocks. The headmaster, Dr. Crabblesnitch always turns a blind eye towards the bullying that goes on, calling it "school spirit". Jimmy has no choice but to pacify the situation, one clique at a time, and keep his chances for a non-orange jumpsuited life afloat.

When the game was first announced, Moral Guardian Jack Thompson took issue with this game.note Well, being the ever-dutiful protector of children's innocence, of course he did. Finding out that the game was a lot less violent than the Grand Theft Auto series (no blood, let alone death) didn't stop him; maybe he just wanted to maintain his image of hatred for Rockstar. Other moral guardians claimed the game was going to let kids think bullying was cool. However, the storyline of the game encourages standing up for those too weak to stand up for themselves, and treats hitting girls, authorities, and young children as the worst crimes you can commit.

Among fans of the Wide-Open Sandbox genre, Bully is fondly remembered for a few unique gameplay twists that set it apart from its big brother Grand Theft Auto. While the quaint New England town of Bullworth is nowhere near as big as Liberty City or Los Santos, the developers manage to inject a great deal of personality and interactivity into the school and surrounding areas. Notably, there isn't a single randomly generated Non-Player Character in the whole game, and every character that Jimmy encounters—whether they're a friend, an enemy, or an unassuming pedestrian—has a name and a distinct personality.

Their personalities come with a wide range of interactions: whenever you encounter a character, you can give them a friendly greeting, insult and harass them (and apologize for it), flirt with them, play pranks on them, or challenge them to a fight. While roaming the school and the nearby town, you'll regularly run into the same characters who figure prominently in the story missions, and their behavior will often change to reflect plot points in the story. Even when you're brawling with enemies or running from the authorities, none of your foes are anonymous Mooks: every one of them has a name and a distinct role in the story, making every punch feel distinctly personal. Notably, the "greeting", "insult", and "apology" mechanics eventually made a comeback in Rockstar's Red Dead Redemption II over a decade after this game's release.

In 2009, scorer Shawn Lee suggested that a sequel was in the works

. In November 2011, Dan Houser of Rockstar Games mentioned a potential Bully sequel in an interview about Max Payne 3. The interview, while promising, stated that work on Bully 2 certainly wouldn't begin until after Max Payne 3 was finished. Rockstar purportedly registered a Bully-related trademark in July 2013. In August 2017, there was a supposed leak of several character designs and environments.