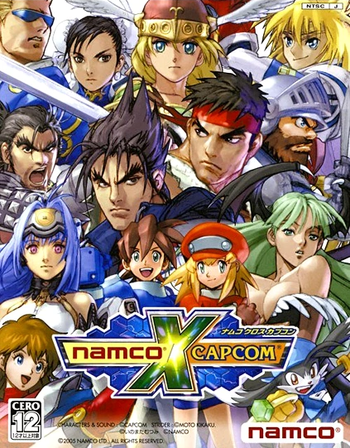 Pronounced Namco Cross Capcom ("cross" as in "crossover"), it's a turn-based strategy RPG by Monolith Soft that was meant to be a Namco Bandai-only game until Namco decided that their own characters weren't enough and asked Capcom permission to use their characters. The game follows the quest of original protagonists Reiji Arisu and his fox spirit partner Xiaomu as they lead an army of Capcom and Namco heroes larger than anything Marvel vs. Capcom 2 and Capcom vs. SNK 2 combined could shake a stick at, to save the multiverse as we they know it from certain destruction by scores of villain teams and a nemesis of Reiji's who has resurfaced after ten years.
Advertisement:

It is most notable for its unique battle system (a pseudo-fighting engine as a nod to the other entries here), curious character choices, and the protagonists' stories continuing in Endless Frontier: Super Robot Wars OG Saga, with the sequel Endless Frontier EXCEED even continuing the story of the original characters. And because of this, you can find the complete translated script here.

Yes, the game is THAT text-heavy.

Also notable for its (fantastic) opening sequence, which was animated by Production I.G and appears to have been directed by Hiroyuki Imaishi (of Dead Leaves, Gurren Lagann and Panty & Stocking with Garterbelt fame).

A Spiritual Successor and sequel would come years later in the form of Project X Zone for the 3DS, with Sega joining Namco and Capcom for the ride, along with Nintendo in that game's sequel.