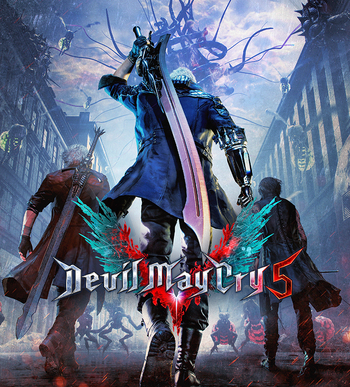 The devil you know returns.
I was angry with my friend: I told my wrath, my wrath did end. I was angry with my foe: I told it not, my wrath did grow.
And I watered it in fears, night and morning with my tears; And I sunned it with smiles, and with soft deceitful wiles.
And it grew both day and night, till it bore an apple bright; And my foe beheld it shine, and he knew that it was mine.
And into my garden stole, when the night had veil'd the pole; In the morning glad I see... my foe outstretched beneath the tree.
—A Poison Tree, by William Blake

Devil May Cry 5 is an Urban Fantasy Stylish Action Hack and Slash game developed by Capcom. The game is the fourth Numbered Sequel in the Devil May Cry series after 2008's Devil May Cry 4, and the first non-Updated Re-release since 2013's DmC: Devil May Cry. Hideaki Itsuno, director of the main games since 2, returns as the director. It released worldwide on March 8, 2019, for PlayStation 4, Xbox One, and PC. A Special Edition for the PlayStation 5 and the Xbox Series X was announced on September 16, 2020 as a launch title for both consoles.

Some time after DMC4, Nero, who's started his own demon hunting gig as a branch of Devil May Cry, finds his happy life with his girlfriend Kyrie shattered when a mysterious hooded figure comes looking for the quarter-demon demon slayer, beating Nero with ease and taking Nero's demonic right arm, the "Devil Bringer", for himself. In response, Nero makes a deal with a Gadgeteer Genius named Nico to have his arm replaced with a cybernetic one she dubs the "Devil Breaker", and follows previous series protagonist Dante and the enigmatic third Playable Character known as "V" into the metropolis of Red Grave City to stop a demonic infestation by an evil World Tree that V claims the hooded man has caused with the help of Nero's stolen arm.

Gameplay mostly serves as a refinement of the systems present in 4, with both Nero and Dante playing similarly to their incarnations in that game. New to the series is Nero's Devil Breaker system, wherein he's equipped with an arsenal of disposable cybernetic arms that each pack different effects, such as granting highly mobile aerial attacks, brief time stoppage, or a launchable Rocket Punch, while most of Dante's innovations stem from his new weapons, such as the Cavaliere, a motorcycle that splits into two circular saw-like weapons, and Dr. Faust, a demonic cowboy hat that expends currency as ammunition. New character V, who uniquely fights through the use of summoning demonic familiars, also joins the fray, leading to the story swapping between the three playable characters. Multiplayer is added for the first time (besides the small Easter Egg co-op with Vergil and Doppelganger in 3) with the Cameo system, letting players share ghost data or team up for co-op in several levels. Levels have less of the Resident Evil-esque puzzles than previous games, leading to much greater focus on pure combat.

A prequel manga, Visions of V, focuses on the origin story of the enigmatic V and began running in April 2019. It is illustrated by Tomio Ogata and can be read on the Japanese manga hosting website, LINE MANGA.

Has an Updated Re-release for PlayStation 5 and Xbox Series X|S, Devil May Cry 5: Special Edition. Special Edition adds Vergil as a playable character, a "Legendary Dark Knight" mode that significantly increases the enemy numbers, "Turbo" mode that increases the entire game's speed by 20%, and various graphical upgrades. The game will release digitally on November 10, 2020 for the Xbox Series and November 12, 2020 for the PS5, with a physical release coming December 1, 2020. Vergil will also be available in a separate DLC for those that already own the original release for PlayStation 4, Xbox One, and PC.

with subtitles), the Final Trailer

Dante has access to four seperate styles called Gunslinger, Trickster, Swordmaster and Royal Guard. Combining these together are useful for creating some very good combos.

Dante has access to four seperate styles called Gunslinger, Trickster, Swordmaster and Royal Guard. Combining these together are useful for creating some very good combos.