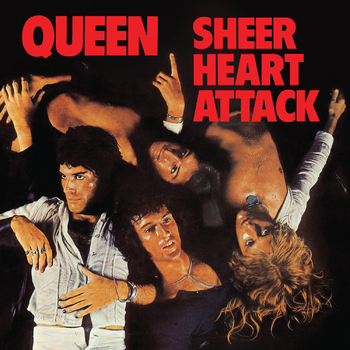 Sheer Heart Attack is the third studio album by English Glam Rock band Queen, released through EMI in the United Kingdom and Elektra Records in the United States on 8 November 1974. While on tour for Queen II as a supporting act for Mott the Hoople, Brian May had fallen ill with hepatitis, forcing an early end to the tour. Back home, the band would write a significant chunk of the songs that would end up on this album, with this new glut of material instigating a shift away from both the pure Hard Rock sound of the band's debut album and the Progressive Rock of their second one. Instead, their new approach would feature a mix of more conventional, radio-friendly song structures and Genre Roulette-style experimentation that marked the first vestiges of the band's Signature Style.

Sheer Heart Attack was supported by two singles: "Killer Queen"— which reached as high as No. 2 in the UK charts, and was their first top 20 hit in the United States, acting as their mainstream Breakthrough Hit in both territories— and "Now I'm Here".

It's in the lap of the tropes: