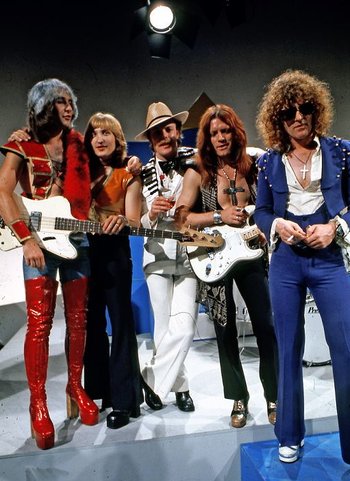 Mott the Hoople were a British Glam Rock group with Blues influences. Guy Stevens, who signed the band to Island Records and also named Procol Harum, took "Mott the Hoople" from the title of an old novel about a circus freak. They became a cult success in the late 1960s mixing original songs with eccentric Cover Versions of Rock & Roll and British Invasion songs, but a string of unsuccessful tours and unpopular albums took their toll on the band and they decided to break up.

Enter David Bowie, who was a fan of the band and offered them a song if they agreed to stay together. After Hoople initially turned down "Suffragette City" they agreed to record the rock anthem "All the Young Dudes", which featured Bowie on saxophonenote on an early take that wasn't released as a single and backing vocals. The song and its album (produced by Bowie) were hits and Mott the Hoople were able to stage a successful comeback as one of Britain's premier glam rock acts. Their next two albums (Mott and The Hoople) were also well received and they placed further hit records in the singles charts. However, Hoople's fortunes took a turn for the worse when lead singer and pianist Ian Hunter left the band; they changed their name to just Mott, then broke up after releasing a few more unsuccessful records.

After the breakup, Ian Hunter did some solo work and later performed "All the Young Dudes" at the Freddie Mercury Tribute Concert with David Bowie and the surviving members of Queen, while lead guitarist Mick Ralphs joined the Supergroup Bad Company. While their success was relatively short-lived, Mott the Hoople managed to be fairly influential; David Bowie, as has been mentioned, was a huge fan of the group, while Queen did their first American tour as their support act (inspiring the song "Now I'm Here").