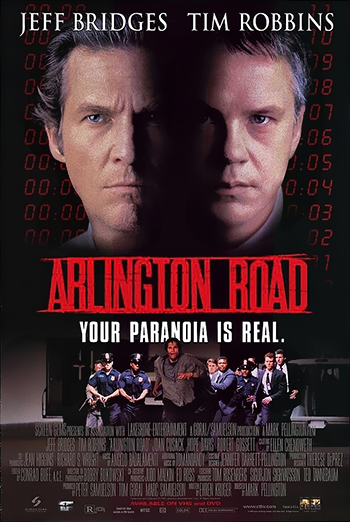 Arlington Road is a 1999 thriller movie, in which a George Washington University professor suspects his new neighbors are planning a terrorist attack.
Advertisement:

The title refers to a street of wealthy people in Bethesda, Maryland, about five miles from Washington, D.C.. Equivalent to Rodeo Drive in Beverly Hills.

The movie stars Jeff Bridges as a university professor who is an expert on domestic terrorism, and whose wife died in a failed FBI mission some years earlier. He has a young son, a girlfriend (played by Hope Davis) and keeps in touch with his wife's former FBI partner, played by Robert Gossett. One day he begins to suspect his next-door neighbors (played by Tim Robbins and Joan Cusack) to be terrorists, based on a number of incidents that have occurred around them, including their son being hospitalized after an accident involving a firecracker. Nobody will believe him though, finding his ideas crazy and paranoid, pointing the finger at his being unable to recover from the trauma he experienced when his wife died in the manner she did.

The film notably marks the wide feature debut for Screen Gems as a label for Sony Pictures.