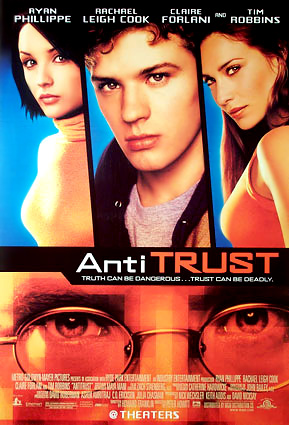 Remember back in the late '90s/early '00s, when everybody thought that Microsoft was an evil Mega-Corp hell-bent on Taking Over The (Computer) World by any means necessary? (Well, even more than they do today?) Well, what if "any means necessary" included murder? And what if it was up to one plucky programmer to expose their malevolence?

That, ladies and gentlemen, is the plot of Antitrust.

Antitrust is a 2001 thriller starring Ryan Phillippe, Tim Robbins, Rachael Leigh Cook, Claire Forlani, and Richard Roundtree. Milo Hoffman (Phillippe) is a young programmer from Silicon Valley whose talents earn him the notice of the Portland-based software corporation NURV, run by billionaire philanthropist Gary Winston (Robbins). Winston wants Milo to help him develop a new system called Synapse, which will link all the world's computers, cell phones, and other electronic devices via satellite. While at NURV, he starts falling for a young programmer named Lisa (Cook), which wouldn't be a problem if it weren't for the fact that he already has a girlfriend in Alice (Forlani). However, after his programmer buddy Teddy (Yee Jee Tso) is murdered, Milo starts to uncover evidence that NURV may have been behind it... and the murder of countless other programmers in order to steal their work and claim it as their own. Out of a mix of duty to his dead friend and disgust at his employers, Milo sets out to destroy NURV from within and give Synapse to the people... unless NURV stops him first and claims him as their next victim.