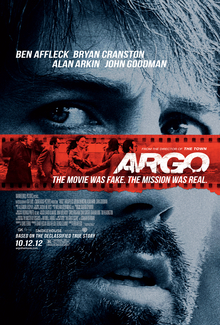 Joe Stafford: You really believe your little story's gonna make a difference when there's a gun to our heads?
Tony Mendez: I think my story's the only thing between you and a gun to your head.
Advertisement:

Argo is a 2012 drama/thriller directed by and starring Ben Affleck, written by Chris Terrio, and produced by Affleck, Grant Heslov and George Clooney. It is a fictionalized account of a real CIA operation in 1980, in which six escaped American hostages were covertly rescued from Iran by agents posing as location scouts for a film adaptation of Roger Zelazny's Lord of Light.

With tensions building in the already-volatile Iran, a group of revolutionaries storm the United States embassy and take a number of staff members hostage. Six employees in a neighbouring building manage to escape, however, and take up refuge in the official residence of the Canadian Ambassador. Ten weeks later, exfiltration expert Tony Mendez (Affleck) is asked by the CIA to help get them out of the country. Working with Hollywood producer Lester Siegel (Alan Arkin) and makeup artist/director John Chambers (John Goodman), Mendez devises a plan to get the employees out of the country by having them pose as a production crew scouting locations for an unproduced science-fiction script called Argo.

With their options limited and the Iranian revolutionaries stepping up their search for the missing Americans, it's up to the three men and their CIA contact, Jack O'Donnell (Bryan Cranston), to get the six employees out.

The film was adapted from the true story of the declassified 1979 rescue mission, and was the third directorial effort for Affleck after Gone Baby Gone and The Town. It won the Oscar for Best Picture as well as Best Film Editing and Best Adapted Screenplay.