Film / The Assassination of Richard Nixon 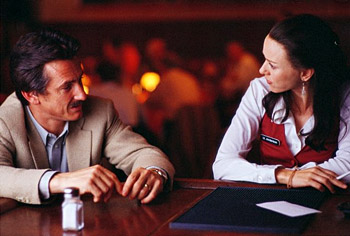 A 2004 drama directed by Niels Mueller.

The year is 1974, and Samuel Bicke (Sean Penn) is a down-on-his-luck furniture salesman. He barely sells enough to keep him in his job, he's separated from his wife Marie (Naomi Watts) and facing divorce, which may in turn cause him to lose his job because his boss only believes in employing family men, and he's having trouble securing finance for the tyre sales business that he intends to set up with his friend Bonny (Don Cheadle). As he faces one setback after another, Sam becomes increasingly disillusioned at the fact that he cannot find success despite being an honest man, and soon focuses his anger on a person who has risen to the top despite being a dirty crook: President Richard Nixon. Before long, Sam hits rock-bottom, and conspires to assassinate Nixon by flying an airliner into the White House.

Based on the Real Life story of Samuel Byck, who had a slightly different surname, but had very much the same grudge against Nixon and planned to assassinate him in the manner depicted in the film.