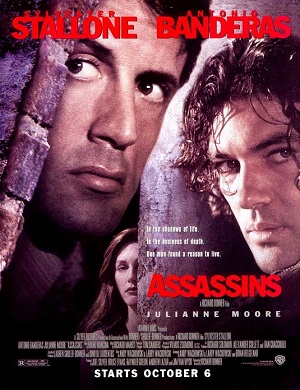 Assassins is a 1995 action film, directed by Richard Donner. It involves the competition between two rival assassins, one an older, veteran assassin and the other a reckless younger challenger eager to become the top assassin in the world. The main stars were Sylvester Stallone, Antonio Banderas and Julianne Moore.

The senior assassin is Robert Rath, (Stallone) a rather sober and efficient man who always gets his target while also making a point of minimizing or avoiding collateral damage. However Rath is becoming tired of the job and increasingly thinking of retirement, and whether or not the people he works for will even let him retire. The younger guy is Miguel Bain, (Banderas) who is pretty much a psychopath who turned his hobby into a profession. He is also a competitive rising star in the field and looking for ways to increase his reputation. Undermining or even killing old guys such as Rath is just one more way to do that.

The two first cross paths when they are sent after the same target. Rath tries to force a confrontation and learn who sent Bain, but Bain fights him to a stalemate and escapes. Both of them are once again sent after the same target, this time a woman called Electra (Moore), a surveillance expert and information thief. Someone is very interested in the latest files she stole. Finding himself unable to kill the woman, Rath decides to save her and retire on the spot. Too bad his retirement starts with Bain chasing both of them.

The main scriptwriters, Lana and Lilly Wachowski, ended up protesting several changes in their script, which they felt made the final product too different from what they had conceived. This did not prevent them from selling to the same producer, Joel Silver, a second script they had completed alongside Assassins. The Matrix would not be ready for release until 1999.

No relations to the Broadway musical of the same name.