Film / Assault on a Queen 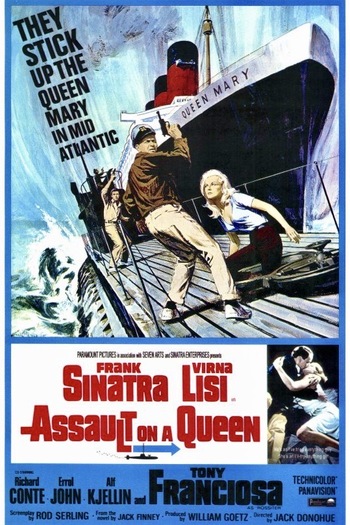 Assault on a Queen is an American action-adventure film directed by Jack Donohue, starring Frank Sinatra and Virna Lisi. Based on a 1959 novel by Jack Finney, it was adapted for the screen by Rod Serling and released by Paramount Pictures on June 15, 1966.

When treasure hunters in the Caribbean come across a sunken World War II-era submarine, they also find that it was scuttled by its captain and is more or less intact. German Eric Lauffnauer is a former U-Boat captain, while American Mark Brittain served on subs in the Pacific. Lauffner proposes that they give up their treasure hunt and instead turn to piracy: in a few days' time the RMS Queen Mary will be in the area with millions of dollars' worth of cash, gold and jewels in its strong room.

Tropes found in Assault on a Queen include: