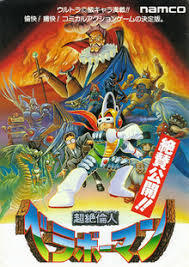 Released by Namco in 1988 for arcades and in 1990 for TurboGrafx-16, Bravoman is a side-scrolling Platform Game starring a parody of Tokusatsu and Sentai as its main protagonist. Our hero was once an average salaryman until he was granted awesome powers by the alien Alpha Man from Planet Alpha, in order to combat the evil Dr. Bomb. Bravoman's main method of attack is to extend his limbs forward to kick or punch at a distance, and he can also turn into a missile-armed submarine for underwater missions. Standing in his way is the good doctor's robot armies, plus ninja princess Waya-Hime, Heavy Metal Ninja Benjamin and Black Bravoman, a rival salaryman with his same powers.

The series faded into obscurity, barring cameos (and a playable appearance in Namco × Capcom) until it was revived on March 9, 2012 as a webcomic as part of ShiftyLook. Fully titled Bravoman: Super Unequalled Hero of Excellence the comic was very silly and self referential.

Slated to get its own web series and, after 25 years, new videogame for smartphones and tablets. The ShiftyLook YouTube channel sadly deleted their account, but luckily a backup channel with all the videos can be found here

The webcomic website ShiftyLook had announced March 10, 2014 that they would be shutting down, ending all of their webcomics including Bravoman. The comic ended at #300. A downloadable archive of the comics (including the various other ShiftyLook comics) can be found here