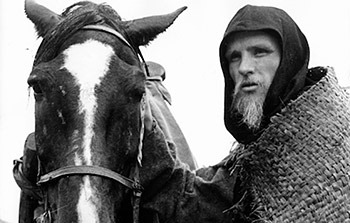 Andrei Rublev (or "The Passion According to Andrei") is a 1966 film by Andrei Tarkovsky, co-written by Tarkovsky and Andrei Konchalovsky. It is loosely based on the life of Russia's famous icon painter of the same name. It is the movie that launched the director to international attention after its warm reception at the Cannes film festival.

The movie is notable for its troubled production and numerous issues with the Soviet Union's strict censorship board. It is Tarkovsky's longest and most violent film, and was only available in heavily cut versions until The Criterion Collection DVD release in 1999, which restored the film to its original 205 minute run time.

As with most Tarkovsky films, it eschews a traditional narrative structure, relying on episodic vignettes that take place around the life of Rublev, with the man himself often taking a backseat to the actions on screen depicting the time. Interestingly, the film never once depicts Andrei Rublev painting, and is entirely in black and white until an ending montage of Rublev's work in blazing color. It is quite depressing, but also considered to be a shining example of one of the 20th century's greatest creative minds at the height of his power.