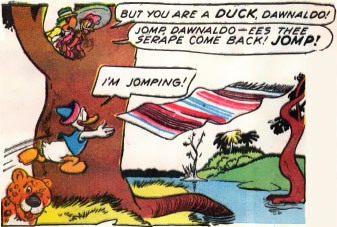 This and other accent-related jokes don't make it into the reprint of this story.
Wilson: [Imitating the Australian Dr. Chase] I'm so sorry! If only Dr. House had paid attention! He'd never even met her! He never does!
House: Chase loves me. [Beat] And isn't Turkish.
— House
Advertisement:

Not the same as Fake Nationality at all, this is when someone briefly imitates another character's accent (and possibly their Catchphrase), usually for comedic effect.

See also Just a Stupid Accent and Ooh, Me Accent's Slipping. If done unintentionally, the person being imitated will invoke Got Me Doing It. Might be a Shifting Voice of Madness for certain kinds of insane characters.

SpongeBob does his best Squidward impersonation while sandboarding.

SpongeBob does his best Squidward impersonation while sandboarding.