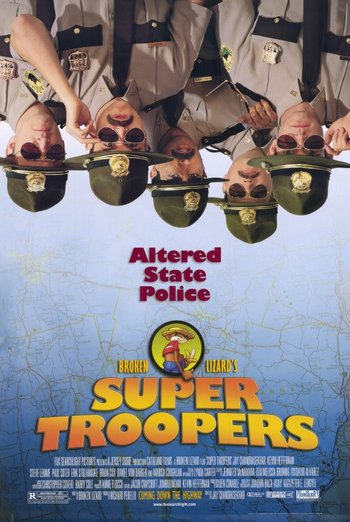 Broken Lizard's Super Troopers is a 2001 comedy film about highway troopers in the state of Vermont. They're on the verge of being shut down and are engaged in a turf war with the local Spurbury Police. Over the course of the movie, they discover a marijuana shipping operation, and tracking down the culprits may be the key to proving their worth to the state and keeping their jobs.

The squad of troopers play a lot of pranks on each other, and a lot of the comedy comes from their wacky on the job hijinks and laid back attitude. The movie generally has a "snobs versus slobs" attitude comparing the lighthearted, mellow Highway Patrol to the uptight, mildly bigoted local police. A running theme is that both departments are pretty much incompetent, but at least the highway cops are honest about it.

It was an unexpected hit for Fox Searchlight and has since become a Cult Classic. A sequel titled Super Troopers 2 was released on April 20, 2018. Watch the teaser here

The films provides examples of:

I swear to God, I'll pistol-whip the next guy that adds more tropes!