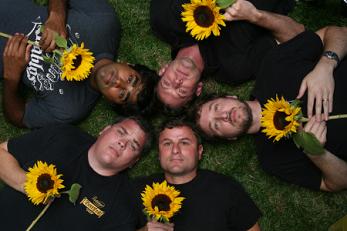 The comedic writing/acting team that consists of Jay Chandresekhar, Kevin Heffernan, Steve Lemme, Paul Soter, and Eric Stolhanske, collectively known as "Broken Lizard." Their first collaborative work was the rather forgettable Puddle Cruiser, an atypical college comedy. They received national recognition in 2001 when they released Super Troopers on the world. All films (with the exception of the most recent) were also directed by Chandresekhar. Their films are notable in that the supporting cast usually has several well-known actors (Brian Cox, Bill Paxton, Cloris Leachman, Jurgen Prochnow, Michael Clarke Duncan...), as well as other names in comedy.

They're also involved in the Tru TV series Tacoma FD.