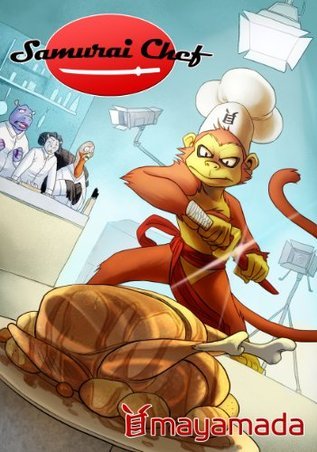 Samurai Chef is one-shot Graphic Novel created and written by mayamada. It tell the story of a popular cooking show Samurai Chef, where dishes are judged by the titular Samurai Chef, with his Samurai Sword. Oh, and it's all set in a World of Funny Animals, and is INCREDIBLY Animesque.

Long ago, the Warrior Emperor Katsu ruled the land. Katsu was a foodie who's love for battle is only matched by his love of food. However, after losing a turkey leg on the battlefield, commanded that all his meals be fully able to witstand battle conditions. He then appointed the first Samurai Chef, to test the dishes created by his royal kitchens.

Cut to the present day, where Samurai Chef is now a popular cooking show, hosted by Jimi Dash. The Samurai Chef, famous for being eternally unimpressed by the food brought before him, judges the affair, while countless kitchens compete for the honor of being the Emperor's Kitchen.