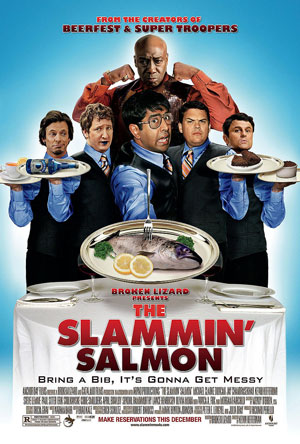 "You must dominate the swordfish. Only then can you sauté it."
—The Champ, after punching a living swordfish in the head.
Advertisement:

The fifth film by Broken Lizard, directed by Kevin Heffernan.

Former world heavyweight boxing champion "Slammin'" Cleon Salmon (Michael Clarke Duncan) is the owner of one of Miami's most popular seafood restaurants, dubbed "The Slammin' Salmon." When he racks up a $20,000 gambling debt to the Yakuza, he tells the restaurants manager, Rich (Kevin Heffernan), that they need to take in twenty grand in one night, since his own extravagant lifestyle has left him unable to pay. Hoping to motivate the wait staff (and avoid the Champ's wrath), Rich begins offering prizes out of his own pocket to whoever the top seller is by the end of the night. When this does not work as well as expected. The Champ issues his own ultimatum: whoever is the lowest seller by the end of the night is getting a "broken rib sandwich." The staff then begins to one-up and sabotage each other hoping to come out on top.

The wait staff includes: Nuts (Jay Chandresekhar), a heavily medicated man, who becomes "Zongo" when he doesn't take his meds; Connor (Steve Lemme), a former waiter who has returned after a failed acting career; Donnie Kinogie (Paul Soter), busboy-turned-waiter in order to meet the Champ's demands; Guy Metdrapedes (Eric Stolhanske), the most arrogant and underhanded of them all; Tara (Cobie Smulders), who is working her way through med school; and Mia (April Bowlby), who is saving to enroll in a ballet academy.