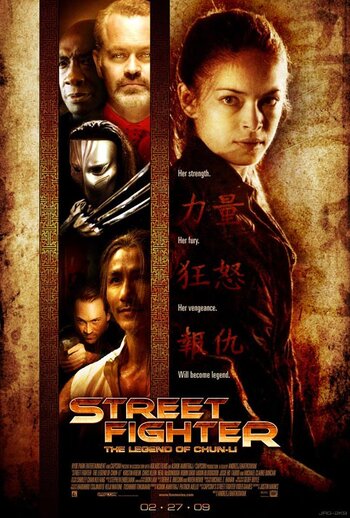 Street Fighter: The Legend of Chun-Li — the second live-action film based on Capcom's long-running Street Fighter video game series, but not a direct sequel to the first — tells the story of Chun-Li Xiang (Kristin Kreuk), a ten-year-old piano/Wushu prodigy who has her young world shattered after the crimelord Bison (Neal McDonough) (with the help of his Scary Black Dragon, Balrog (Michael Clarke Duncan)) kidnaps her father and whisks him off to parts unknown. After the death of her mother seventeen years later, Chun-Li — now a concert pianist — receives a mysterious scroll that tells her to go to Bangkok. Once there, she meets Gen (Robin Shou), a former partner of Bison and leader of the mysterious Order Of The Web; Gen offers to train Chun-Li in preparation for her inevitable showdown with Bison.

The film also has a subplot about Interpol agent Charlie Nash (Chris Klein) and Bangkok detective Maya Sunee (Moon Bloodgood), but they don't really matter until the end (and even then, they only serve as backup for Chun-Li).

Street Fighter: The Legend of Chun-Li contains examples of the following tropes: