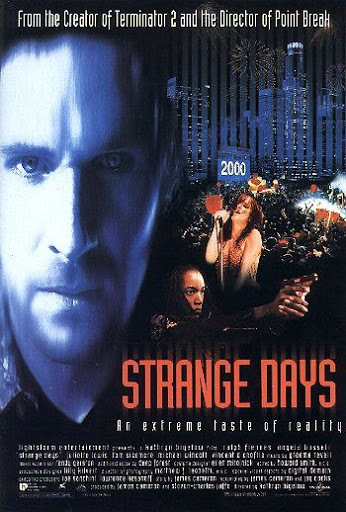 You know you want it.
See...I can get you what you want, I can. I can get you anything, you just have to talk to me, you have to trust me. You can trust me, 'cause I'm your priest, I'm your shrink...I am your main connection to the switchboard of the soul. I'm the magic man...the Santa Claus of the subconscious. You say it, you think it, you can have it.
— Lenny
Memories are meant to fade, Lenny. They're designed that way for a reason.
— Mace
Advertisement:

Lenny Nero (Fiennes) is a grungy ex-cop eking out a lonely, miserable existence in the urban nightmare that is 1999 Los Angeles by dealing in dreams. He sells illegal "SQUID" recordings that allow the user to directly experience moments from people's lives as if they were actually there, living every sight, sound, thought and feeling that the person doing the recording experiences. This allows the user to experience anything - sex, drugs, and even death. Although charming and suave on the surface, Lenny is deeply unhappy and pathetic, addicted to his own product and desperately reliving the happy moments from his long-dead relationship with his ex-girlfriend Faith (Lewis), a rising punk musician whom he saved from the gutter only for her to discard him when she began to make it big. The only two of his few remaining friends who don't regard him as a washed-up loser are Mace (Bassett), a bodyguard and chauffeur, and Max (Tom Sizemore), a paranoid and cynical PI with ambiguous morality.

Lenny's life, such as it is, begins to completely fall apart a few days before the millennium celebrations, when he anonymously receives a snuff recording that depicts the agonizing rape-murder of a prostitute he is acquainted with, whom he encountered hours before her death. Because she attempted to warn him of something concerning Faith, Lenny begins to suspect that Faith is the next target...