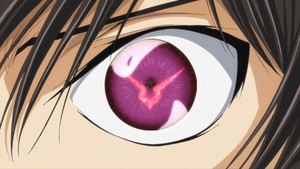 "I, Lelouch vi Britannia, command you...give this trope more examples!"
A variation of Eyed Screen, One-Eyed Shot is a camera trick where a person's eye is shown onscreen.
Advertisement:

Not to be confused with Cyclops, a mythical creature who has just one eye.