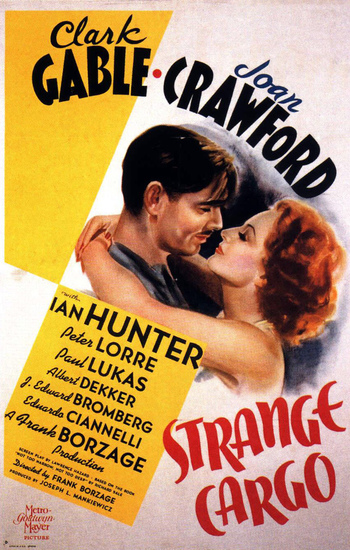 The setting is an island prison, somewhere in French Guyana, a place that's clearly supposed to be Devil's Island. Verne (Gable) is a thief who keeps repeatedly trying and failing to escape, rather than just serving out his sentence, because that's the kind of guy he is. In desperation the warden gets him a laboring job outside the prison walls in an effort to tame him. That backfires, as he meets Julie, who has arrived at the island to work as The Chanteuse at the local cantina (and maybe also as a prostitute). Verne makes another bolt from prison in order to find Julie and do the horizontal mambo with her, but when he breaks into her room, she calls the cops and he's sent back inside. Despite calling the police, Julie is ordered by the island's governor to leave forthwith for having a convict inside her room. She rejects the attentions of M. Cochon aka "Pig" (Peter Lorre), but miscalculates and winds up as the prisoner of another islander, Marfeu.

Back in prison, Verne muscles his way in on another escape attempt. A hardened, vicious prisoner named Moll has arranged to have a boat laid up on the beach. His party, including Moll's innocent young friend Dufond, cultured wife-poisoner Hessler (Paul Lukas), and a couple of other prisoners, will bust out and make a run through the jungle. They attempt to ditch Verne, but he takes advantage of the chaos caused by their escape and makes a bolt on his own as well, liberating Julie from Marfeu along the way.

Moll's party is assisted by Cambreau (Ian Hunter), a prisoner who just sort of appears in the jail, without anyone knowing how he got there. The gentle, kindly Cambreau has an uncanny knack for knowing where to go, what to do, and what's going to happen. He also has a habit of staying with the prisoners as they start to die off during their escape attempt, helping each one to find spiritual peace and redemption as they go. And there's that one time his voice sounded inside Julie's head, when he wasn't even there, as she was about to kill a man...

Eighth and last film pairing of Gable and Crawford.