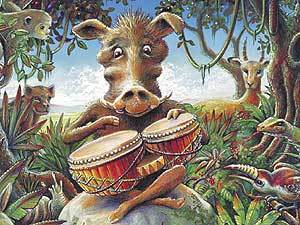 The wildlife is getting restless.
Mr. Boosey: Well, Upsidasi, what do those drums say?
Upsidasi: Dey say... "Boom diddy, boom diddy, boom boom boom".
— Carry On Up the Jungle
Advertisement:

A sister trope to The Natives Are Restless, this harks back to the days in deepest darkest Africa, where the mood of the natives can be determined by their midnight drumming. If they're banging away on those puppies till the wee small hours, trouble is definitely brewing. The more anxious white people can be driven to nervous exhaustion by Those Infernal Drums (a good name for a band), but the moment you really worry is when they stop, suddenly. Sometimes we get to see the wild abandoned dancing of the natives.

They are also used by the natives to communicate, as the native guide will often grab plot-relevant info from them (Truth in Television, in fact

No relation to the types of drums used in jungle music, like the Amen Break.