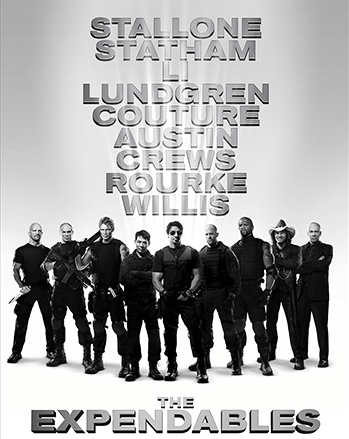 Most people will hardly find someone they have never seen before in this movie.
"Would it have been faster to say who isn't in this movie? Jesus, it's like the Super Smash Bros. of Hollywood!"
— Arthur Knowledge on Mars Attacks!
Advertisement:

Any show, movie, etc., where the majority of the lead roles are played by big-name actors. They don't have to be A list. B, C, and even D will do, although in that case, relying on their talents is preferable to relying on their names. If the character list is really big, this can spill over into supporting roles as well.

In the days of the studio system, this was easy to do, but once actors' salaries started rising — which coincided with major advances in visual effects technology, meaning that the effects, rather than the cast, soon became the most expensive part of a film's production — this practice gradually declined. Compare the casts at the beginning of the Disaster Movie Era with those at the end of it.

These days, you'd either need a lot of money to pull this off, convince the actors that this is just a fun breather film or be willing to settle for loads of cameos. The exception is animated films, where stars are willing to get paid a lot less just to do voice work and the logistics and scheduling are easier.

It also happens fairly frequently in smaller countries simply by virtue of there being less actors to choose your cast from, leading to many faces being well-known; thus a much larger proportion of the overall acting population can be considered (local) stars.

A good way of being able to tell if it is an all star cast is by an examination of the theatrical poster, if it has more than five names listed on it it is usually big names.

Roger Ebert referred to films with All-Star Casts as "Box Pictures" due to the tendency (at least in the '70s) to display head shots of the cast in little boxes on the poster.

Compare Massive Multiplayer Crossover, Celebrity Voice Actor, and Dream Team. Contrast Amateur Cast, when a work is predominantly comprised of unknown and obscure actors. See also Supergroup (a music band formed from several members who were already famous for their musical ability). Expect an Establishing Team Shot to show off the actors.

The "Don't Look Up" ensemble

The trailer for ''Film/DontLookUp'' lists its big-name cast, including all their Oscar credentials, to help sell the movie.

The "Don't Look Up" ensemble

The trailer for ''Film/DontLookUp'' lists its big-name cast, including all their Oscar credentials, to help sell the movie.