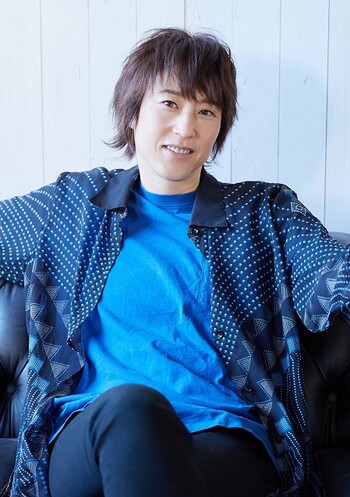 That's a lady, in case you haven't noticed.
Advertisement:

Who is Mitsuki Saiga (born June 12, 1973 in Saitama, Japan)? Well, she's got quite a deep voice; as a result, she's normally cast in the roles of young boys or tomboyish women. In fact, she can pitch her voice so deep that it's almost impossible to tell it belongs to a female. Even her female roles tend to have deep voices. A certified Bifauxnen in Real Life as well; just check out the group shot she took with Mamoru Miyano, Aya Hirano and Hiroshi Kamiya at the 2nd Seiyu Awards.

Essentially is the Distaff Counterpart of Akira Ishida, Ayumu Murase and Kazutomi Yamamoto in terms of vocal range, though in terms of career path and typecasting, it goes to Kouki Miyata. Her western counterpart is Jennifer Hale, as many of their roles specialize in using a contralto voice.

Seems to be friends with Takahiro Sakurai in real life.