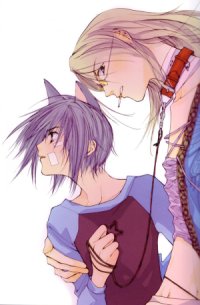 Other manga by Yun Kouga:
A running manga series and 12-episode anime created by Yun Kouga, Loveless follows the story of a 12-year-old Ritsuka as he searches for the truth behind his brother Seimei's murder — and, unexpectedly, inherits his brother's Fighter Unit, 20-year-old college student Soubi, who in their first meeting declares nonchalantly that he loves Ritsuka, kisses him, and draws him into a world of spell battles, Fighters and Sacrifices. Ritsuka learns that he is "Loveless" (see Meaningful Name), and has a destined Fighter somewhere in the world and an as-of-yet unrevealed birthmark on his body of his "name".
Advertisement:

Oh, and all the virgins in their universe have cat ears and a tail until they lose said virginity.

Despite the considerable BL themes in Loveless, the focus is more on relationships themselves and the dynamics between the people, be they straight, gay, or entirely non-romantic (Yun Kouga herself has stated that she doesn't personally consider the series as BL). Among other things, the series deals with very real situations such as Domestic Abuse, childhood sexual abuse and trauma, and other "not for kids" issues. The series is also known for having Mind Screw aspects of epic proportions.

The manga began serialization in the shoujo/josei magazine Monthly Comic Zero Sum in 2002, and is still ongoing. It was formerly licensed in English by Tokyopop, and is now being continued by VIZ Media, who are also releasing two-in-one editions of the volumes that Tokyopop previously published with brand new bonus comics and interviews.

The 12 episode anime adaptation, which first aired in 2005, covers most of the chapters from the first four volumes of the manga. While it's a faithful adaptation, there are a few differences between them, like how some of the events are in a different order than in the manga and exclusive scenes that didn't occur in the manga, especially the ending.

or a Russian film.