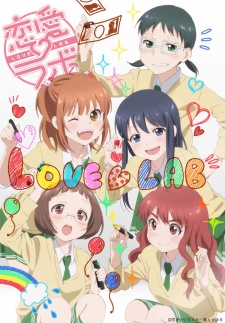 We wanna fall in love!
Riko and Maki are second years at the prestigious Fujisaki Girls' Academy. The first is admired for her boyish and rebellious personality, while the second is the very calm and proper student council's president. Both live their own lives until Riko enters the student council room... and finds Maki practising kisses with a body pillow. Riko is forced to keep Maki's secret and ends up as her advisor in the student council (but also as Maki's love counselor). Hilarity Ensues when the other members of the student council join in.
Advertisement:

Originally a Yon Koma by Ruri Miyahara serialized in the magazine Manga Home (later moved to Manga Time Special) since 2006, Love Lab (or Ren'ai Lab [恋愛ラボ] if you go with the kanji reading) got approved for an anime adaptation by Dogakobo, directed by Masahiko Ohta, that started airing in the Summer 2013 Anime season.

Crunchyroll is streaming the anime, which can be viewed legally here