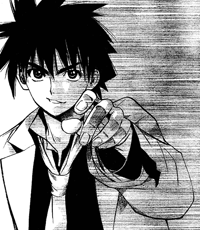 M×0 (Emu Times Zero) is a manga by Yasuhiro Kano, which was serialized in Weekly Shonen Jump from 2006 to 2008. Its 99 chapters were compiled into 10 volumes.
Advertisement:

A hot-tempered boy named Taiga Kuzumi has failed the entrance exam to Seinagi Private High School. With little memory of what had actually happened, he sets out to confront the girl who had burst out laughing at him during his interview, sure that she is to blame, only to be mistaken by a teacher for trying to sneak out instead of in. Turns out that Seinagi is actually a Wizarding School, and due to a complicated chain of events ending in said teacher being blown up, now everyone believes him to be an elite magic user—when he can't use magic at all!

Now Taiga has to put his wits to the test in order to keep up that cover, or both he and the teacher will be in very big trouble.