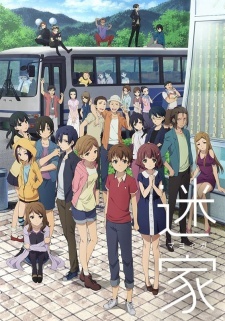 30 young men and women who came together on a shady bus tour. The tour's destination: an elusive, possibly nonexistent village called Nanaki. In Nanaki Village, one can lead a utopian existence, free of the world's obstacles … or so it was rumored, like an urban legend. "In despair over the real world ... wanting to escape the tedious daily life … wanting to restart your life from scratch…" The bus headed deep into the mountains, carrying 30 people each harboring their own expectations and wounds in their hearts…

as part of the Spring 2016 Anime lineup.

The Lost Village provides examples of: