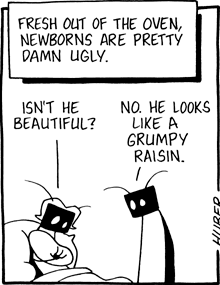 "Bringin' you the truth, no matter how bad it hurts."
— Three Dog, Fallout 3
Advertisement:

Since everybody in TV land spends all day desperately lying their way out of situations, one of the more reliable gags is to create a situation where you'd imagine the characters would lie and have them be perfectly honest and straightforward instead. Sometimes this can separate a polite person from an impolite person, since a brutally honest character may say exactly what's on their mind. A hallmark of the Caustic Critic, or of a child who doesn't really know how to mince words yet.

A common twist on this is when the characters are brutally honest, but then their honesty is not believed. Sometimes, this is deliberate.

Another common twist is for a character to promise brutal honesty before saying something kind.

A form of Bait-and-Switch. Often employed in "The Reason You Suck" Speech. A Blunt "Yes" typically is an expression of this. Armor-Piercing Response may use this. If a character is brutally honest about why they don't want to do something, they're Not Even Bothering with an Excuse. If the honest character is brutal in general, then the Jerkass Has a Point. If the character is just brutal regardless of honesty, they're most likely your garden-variety Jerkass.

Another variation has Charlie being perfectly sincere and asking "Have I ever lied to you?" Joe will then list every instance where Charlie has lied out of his proverbial butt, often citing many examples. Little wonder Joe doesn't believe him. It seems Charlie is quite an accomplished and imaginative fibber. Contrast Honesty Aesop.