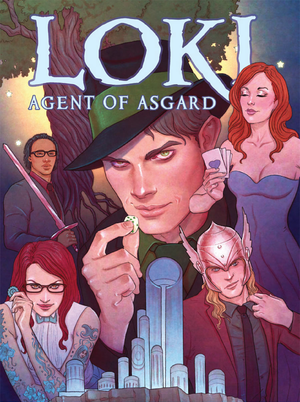 Team Lokinote Teen!Loki in the middle and then clockwise: Lorelei, Thor, Verity, and Sigurd (The Ever-Glorious)
"Trust me. I (still) know what I'm doing."
— Loki, issue #1 (and #15)
Advertisement:

Loki: Agent of Asgard is the continuing adventures (after Journey into Mystery (Gillen) and Young Avengers) of Marvel's lovable God of Mischief, Loki, as written by Al Ewing. Only now those adventures involve doing wet-work for the All-Mothers of Asgard, in exchange for their freedom and the chance of redemption. The twist is that this time, Loki really, really, really means it. But the problem with having a past like Loki's is that sooner or later, it's going to catch up with you.