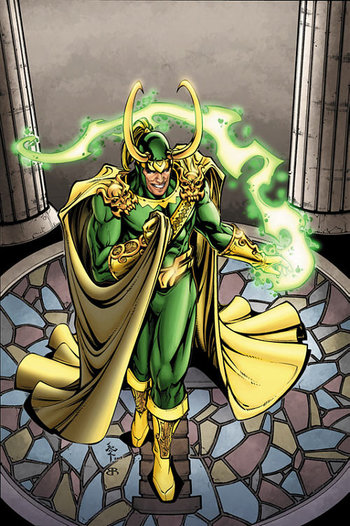 "No. Mischief is a small thing, a toy I've well used and discarded. This isn't mischief. This is mayhem. Just watch."
— Loki, Siege: Loki Vol. 1 #1
Advertisement:

Loki is the adoptive brother and Arch-Enemy of Thor. He is based on the being of the same name from Norse Mythology. The character first appeared in Journey into Mystery #85 (October, 1962). The character was created by writer Stan Lee, scripter Larry Lieber, and penciller Jack Kirby.

Loki was born of Laufey, King of the Frost Giants. Laufey was a brute of a father, ashamed of his son's comparatively non-giant size, but as luck — and Loki's own hand — would have it, Laufey would be slain in battle with the All-Father Odin, Lord of Asgard. Out of pity, Odin took the boy from Jottunheim and raised him as his own son alongside his biological son Thor.

Throughout their childhood and into adolescence, Loki was resentful of the differences in which he and Thor were treated by the citizens of Asgard. The Asgardians, a race of proud warrior deities, loved Thor for his courage, his might, tenacity, and bravery in battle, and Loki was clearly inferior to his foster brother Thor in those areas. What he lacked in size and strength, however, he made up for in intelligence and skill, particularly as a sorcerer. And thus Loki came to detest Thor.

He arranged for Thor to be exiled to Earth in mortal form, and plotted his death, unleashing scores of monsters and mayhem upon him and the world in pursuit of that goal, whilst in Asgard he schemed on many occasions to seize rulership of Asgard. His plots against Thor were thwarted time and again, and when he pitted him against the Incredible Hulk, he made new mortal enemies when The Avengers united for the first time to oppose him.

But Loki couldn't be humbled. He bartered with other mortals and gave them power to fight this new team; he schemed with other villains and sought to defeat Thor and his allies with their aid; while still working towards one day claim Odin's crown.

And after decades and centuries of planning and plots, he finally achieved his goal -– and for his troubles, Thor brought about Ragnarok.

Loki was shaken, as he did not seek something so terrible as the destruction of Asgard, but Thor's actions freed them from the tyranny of the Shadow gods, and they were reborn.

Loki returned as a woman, but regained his masculinity in short order, and once again worked towards taking over Asgard and the defeat of Thor. But Loki paid a heavy price for his actions and he died once again, only to rise once more, this time as a child; as he had schemed to manipulate Hela into having his name removed from the Book of Hel, thus when he died, he would be reborn instead of truly dying. Kid Loki was innocent and trusting, but still as wily as the God of Mischief was.

Thor found Kid Loki on Earth, restored part of his identity (though he remained in the form of a child and lost almost all his memories and powers) and brought him back to Asgard, where he found an echo of his elder self, whom Kid Loki reduced into the form of a magpie, condemned to a lifetime as "Ikol," his opposite. Determined not to become like his past self, Kid Loki went on several adventures to gain Thor's and everyone else's trust and affection, but eventually found himself in a situation that required his mind to be destroyed by letting Ikol overwrite it and take his body. So, the Loki seen now is a bit of a copy of himself, but while he did end up nearly causing the meltdown of reality as we know it during his stint with the Young Avengers, he discovered that his heart just wasn't in it anymore - the fact that Kid Loki's memory functioned as a sort of conscience ("I am the crime that will not be forgiven") and his absorption of Kid Loki's memories and, to an extent, his nature, didn't hurt.

Loki became more appreciative of his brother Thor, who still (rocky periods aside) treats him with trust and love. Now he puts his mind towards more benevolent ends, and has assisted Thor and his friends in their hours of need — even if he's still as cunning as before. He even worked for the good of Asgard, too, in the All-Mother's secret service, if partly to expunge one crime, one story, from his past so he wouldn't be bound by it and turn back into his old evil self. Then, after a stint as the All-Mother's spy on Malekith's Dark Council, he appeared to betray her by stabbing Freyja in the back with a poison blade. However, as Cul, Odin's currently semi-evil older brother and right-hand, accurately noted, failing to kill Freyja with a poisoned knife from that range would make Loki either "a very bad poisoner, or a very, very good one."

It turned out to be the latter, both to get him in closer to the Dark Council, and to protect Freyja (if he hadn't done it, Malekith would have sent someone who would have succeeded). During this time, he also arranged the reformation of the Avengers because, as he put it in Young Avengers, "Assembling the Avengers - it's Loki's greatest trick". This time, it was sincere motives, as he pretended to be the herald of the corrupted Celestials, leading to the formation of the 2018 Avengers team by playing the villain (which Black Panther - and possibly Thor - noticed, even if no one else did). However, the Dark Council didn't trust him, and the resurrected Laufey killed him by eating him in War of the Realms... or rather, he tried.

Thanks to Matt Murdock as 'the God Without Fear' knowing he was alive and pulling off an impossible ricochet throw of Heimdall's sword down Laufey's throat, Loki cut his way out, and claimed the throne of Jotunheim, of which he is now the somewhat reluctant King.

Tropes associated with Loki and his various incarnations:

In General
The Original Loki 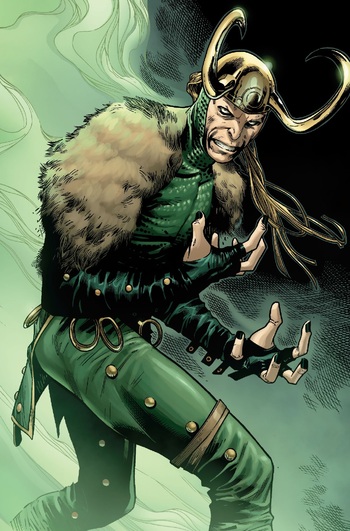 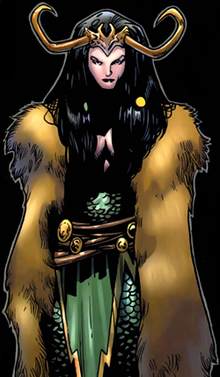 Notable Aliases: The God of Mischief

Loki is the biological son of Frost Giant chieftain Laufey. After Odin killed Laufey in battle, he adopted Loki and raised him as his own son. It was revealed that Loki engineered his own adoption through means of a Stable Time Loop as part of his plan to destroy the Aesir. 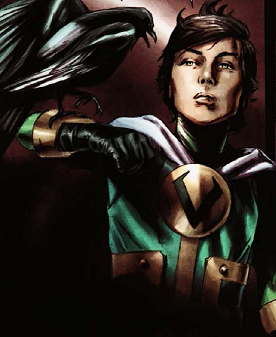 After his death in Siege, Loki was resurrected as a preteen without his adult memories, powers, or emotional baggage. He was the lead character during the run of Kieron Gillen on Journey into Mystery. 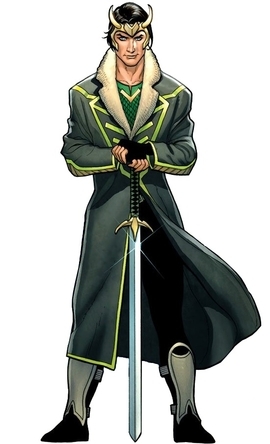 "I am the echo of a screamnote They're a copy of the old Loki. I am the magpie who whispersnote They're mostly the consciousness that Ikol was. I'm the crime that will not be forgiven."

He/she... or rather they... are the Loki who was born from the death of Kid Loki at the end of Journey into Mystery, who cursed themselves with their first breath, and the world (including the readers) with the second. Oddly they're pretty much neither of their predecessors, but instead take elements from both well still somewhat forming their own identity. "Star" of Young Avengers and Loki: Agent of Asgard. 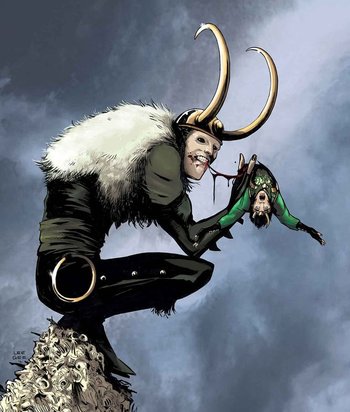 "You think I am the Loki that was?! Dolt! Simpleton! I am what will be!"

King Loki (or Old Loki, if you prefer) is a representation of everything the Teen Loki hates and fears: Themself drawn back into the ways of evil and insanity. The main villain of Loki: Agent of Asgard. 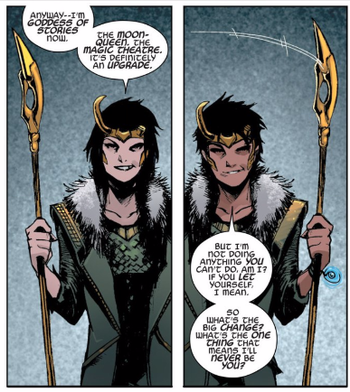 The God of Stories (or Goddess of Stories; they're not fussed), is the latest of Loki's reincarnations, who so far appears to be something of an aged up version of Teen Loki. This Loki is still new, so their full personality is yet to be fleshed out (and they're still catching up with everything), but has decided to escape the inherent evil associated with being the God of Lies by rechristening themselves the God Of Stories, which is essentially the same thing but far nicer, and with more importance, given the Gods' nature as creatures of story.Note: Unmarked Spoilers for Loki: Agent of Asgard #13 onward.