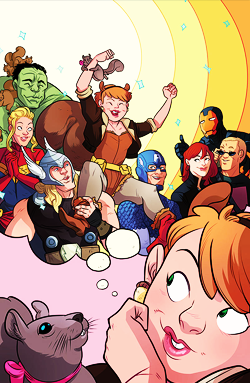 ◊
♫ Squirrel Girl, Squirrel Girl! She's a human and also a squirrel! Can she climb up a tree? Yes, she can, easily! That's whyyyy her name is Squirrel Girl! Is she tough? Listen, bud: she's got partially squirrel blood! Who's her friend? Don't you know: that's the squirrel, Tippy-Toe! Surprise! She likes to talk to squirrels! At the top of trees, is where she spends her time like a huuuuman squirrel. She enjoys fighting crime! Squirrel Girl, Squirrel Girl! Powers of both squirrel and girl! Find some nuts, eat some nuts! Kicks bad guuuuuys' evil butts! To her, life is a great big acorn! Where there's a city crime-torn, you'll find the Squirrel Girl! ♫
— Doreen Green, the Unbeatable Squirrel Girl (To the Tune of... "Spider-Man")
Advertisement:

The Unbeatable Squirrel Girl was an ongoing monthly comic book published by Marvel Comics, debuting January 2015. After years spent on the sidelines of the Marvel Universe as a Lethal Joke Character (and official nanny of The Avengers), Doreen Green (Squirrel Girl) finally gets her own solo title in the form of this book. Having recently enrolled at Empire State University, Doreen just wants to be a normal college student like everybody else — easier said than done, when you got threats like Galactus, Devourer of Worlds on your (literal) tail.

Written by Ryan North and illustrated by Erica Henderson, Unbeatable Squirrel Girl is perhaps the gentlest, wackiest, weirdest book Marvel's put out in quite some time — rivalled only by the Howard the Duck series that came out just months later.

After an initial run of eight issues, Unbeatable Squirrel Girl was relaunched as part of the All-New, All-Different Marvel initiative. ("Only Our Second #1 Issue So Far This Year!"). Henderson left as artist after Issue #31 and was replaced by Derek Charm.

The series also has an OGN, Squirrel Girl Beats Up The Marvel Universe, released alongside the second series and taking place between issues 11 and 12 of that series.

On May 2019, Ryan announced that the staff unanimously figured they went as far with the character they could go. Thus the series would come to an end at its 50th issue

and end on a high note. And indeed, the series closed shop in November 2019.