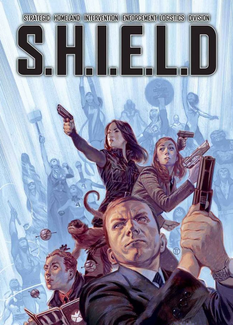 Based on the TV series based on the film franchise based on a comic book universe.
Advertisement:

Following the success of Agents of S.H.I.E.L.D.'s first season, Marvel Comics announced a new, monthly volume of its book about their premier intelligence agency S.H.I.E.L.D., written by Mark Waid and illustrated by a rotating team of artists. It is an adaption of the series and its characters set in Earth-616, NOT the MCU.

Unlike previous volumes of the title, centered around a specific character (or S.H.I.E.L.D. itself), this one is effectively a loose Comic-Book Adaptation of the TV series' original premise, starring much of its cast as well as boasting more of an Anthology Comic feel, with self-contained stories based around team-ups with various superheroes from the Marvel Universe.

The series ran for a year starting December 2014, concluding with issue #12 in November 2015 and relaunched under the name Agents of S.H.I.E.L.D. (just like the show) as part of the All-New, All-Different Marvel initiative.