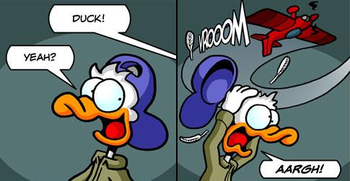 The English word "duck" has two possible meanings (if you don't listen to cricketersnote "Duck" in Cricket means the batsman is out before scoring any runs—a shortened form of "duck's egg".):

In fiction, characters have a surprising tendency to mix these words up. Generally, if an object is coming at someone very fast, and they are advised to "duck!" they will immediately look around for a duck — "Where? Where?" — thinking the word to have been a reference to the latter example, that is, the bird. Or, if there is a duck, and someone informs them of its presence with the demonstrative "duck!", they will cover their head to avoid an incoming object, thinking the other character to have been advising them to lower their head, as in the former definition.

You would think that for a rational person, context would clarify these things. The source of the humour comes in this case from this expectation of people's ability to discern the intended meaning of an ambiguous utterance being subverted by their apparent confusion in the heat of the moment. In either case, there is the further opportunity for "slapstick" comedy in the character throwing themselves to the floor or being struck by a fast moving animal. The improbability of this happening is justified in the context of a comedy by its providing amusement to the viewer.

We hope that clears things up.

Subtrope of Who's on First?. See also Ambiguous Syntax (of which "I saw her duck" is a famous example). Also see Inherently Funny Words; this joke gains some of its humor from the duck's status as an inherently funny word. For ducks (waterfowl) that are funny, see Quacking Up. Also Literal Money Metaphor, another Literal Metaphor, but this time it's about money.