Literature / Moses, Man of the Mountain 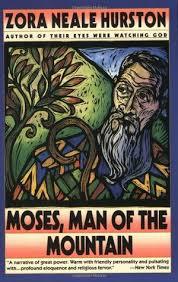 Moses, Man of the Mountain is a 1939 novel by Zora Neale Hurston, author of Their Eyes Were Watching God. It's the story of the life of Moses from the Pentateuch, but a somewhat different Moses from what most people know. This is the Moses of African folklore: a wizard, a voodoo man, a man of Nature.

Suten-Rech Moses, son of Pharaoh Rameses I's daughter, is bright, compassionate, and a decorated war hero by the age of twenty-five. However, he is disturbed by the plight of the enslaved Hebrews, which no one else in the palace seems concerned about. One day he is forced to take matters into his own hands and kills an abusive Egyptian overseer. In an attempt to give the Hebrews some degree of self-government he appoints a Hebrew in his place, which the other Hebrews are none to happy about. Bitter and disillusioned by this ingratitude, Moses flees Egypt.

In the land of Midian he meets a man named Jethro, a local chief with mysterious powers who claims to have found the one true God, who lives on nearby Mount Sinai. Moses settles down in Midian, becoming Jethro's apprentice in magic and marrying his oldest daughter. After many years he goes up to meet the god on Mount Sinai, who tells him to go back to Egypt and bring the Hebrews out of slavery. Moses is reluctant, but agrees.

Moses returns to Egypt and confronts the current pharaoh, his uncle Ta-Phar. Ta-Phar refuses to free the Hebrews, but Moses is able to wear him down with disastrous plagues. Moses leads the Hebrews out of Egypt and gives them a new God and new laws, but as they approach the Promised Land he discovers that in their hearts they are still slaves. He therefore keeps them in the wilderness for forty years, teaching what it truly means to be free, and what they must do if they want to remain a free people.

Highly allegorical, the story deals with themes of oppression, its effects on a people's psyche, freedom, and the cost of freedom.

Moses, Man of the Mountain contains the following tropes: