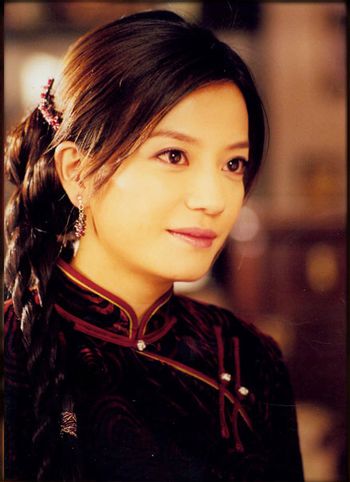 Zhao Wei as Yao Mulan in the 2005 TV adaptation.
Advertisement:

Moment In Peking is a novel written by Lin Yutang, and published in 1939. Because it was aimed at the Western readership, it was written directly in English, but it was later translated in Chinese under the title "京华烟云" (Jinghua Yanyun). It has been adapted into TV series in China on three occasions; the 2005 version features Zhao Wei as the main character.

The story follows the life of an extended upper-class Beijing family from the time of the Boxer uprising in 1900 to the beginning of the Second Sino-Japanese War in 1937. It is both a depiction of the daily life of a Chinese family, and a chronicle of the political and social changes sweeping China during that period.

The main character is Yao Mulan, who is introduced as a little girl, and becomes a middle-aged woman by the end of the novel.