The Glorious War of Sisterly Rivalry 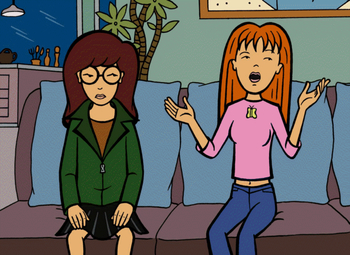 There are two sisters, close enough in age to have a relatively equal relationship, but light years apart in personality. More often than not, they can be roughly described as follows:

While it is usually made clear that they love each other, the sisters are constant verbal combatants. Most of the time they find each other incomprehensible. Sometimes they both harbour a secret inferiority complex. After all, calling someone "The Smart Sister" implies that she isn't pretty, and vice-versa. The sisters may become love rivals, but often they prefer very different types. The smart sister is usually the more sympathetic of the two, either an explicit Creator's Pet or the character preferred by fans. This is often the result of writers themselves having been the Smart One growing up and thus often projecting their own feelings onto her, though many a reader can relate (and project too).

A special, female variant of Sibling Rivalry and Foolish Sibling, Responsible Sibling. If either or both sisters get on okay with people they aren't related to, but the Glorious War gets nasty, then, well, Friends Are Chosen, Family Aren't. Cain and Abel can kick in when the differences of opinion go really wrong.

Can overlap with Polar Opposite Twins and is a Sub-Trope of Sibling Yin-Yang.