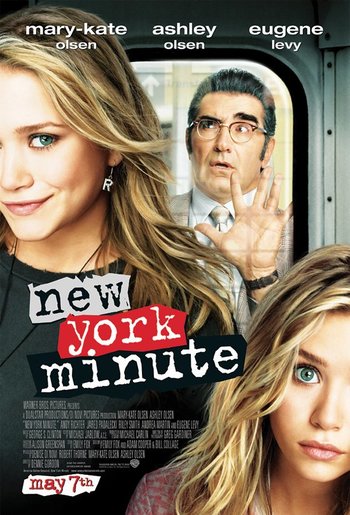 New York Minute is a 2004 teen comedy film starring Mary-Kate and Ashley Olsen in their first—and last—theatrical outing since It Takes Two.

The plot follows the twin Ryan sisters: Jane (Ashley), the smart and responsible one, and Roxy (Mary-Kate), the rebellious one. On the day the film takes place, both Roxy and Jane travel into New York City, where Jane must give an important speech for her college future while Roxy is hoping to sneak backstage at a Simple Plan concert. They end up caught in an elaborate piracy conspiracy led by the greedy Bennie Bang (Andy Richter) as well as being framed for stealing a senator's pet dog. Also on their tail is a truant officer, Max Lomax (Eugene Levy), as well as the inevitable love interests.

It did very poorly at the box office and was savaged by critics, marking the end of the twins' stardom.