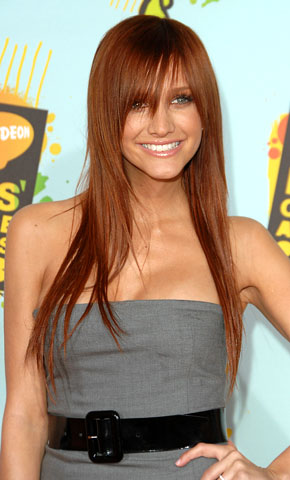 "Yes, I can put my head up and I can continue."
Got bruises on my heart, and sometimes I get dark
Advertisement:

Ashlee Simpson Ross (previously Ashlee Nicole Simpson and, during her first marriage, Simpson-Wentz), born October 3, 1984 in Waco Texas, is an actress and singer (2001–present) and also younger sister to Jessica Simpson. Early in her career, she scored hits with the songs "Pieces Of Me" and "Boyfriend".

To much of the world, however, she is known for the infamous Saturday Night Live performance in October 2004 where she was caught lip-synching in front of millions of people at home and then proceeded to do a hoe-down for some bizarre reason, followed by a disastrous off-key performance at the 2005 Orange Bowl in which she was booed off stage. She is also an actress, with her best-known role being Violet Foster in the Melrose Place remake. She was married to Fall Out Boy's Pete Wentz and has a son named Bronx Mowgli. Currently married to Evan Ross, the son of Diana Ross with whom she has two children with, a daughter named Jagger Snow and a son named Ziggy Blu.

A cover of her song "La La" would later be included in the cult classic video game Elite Beat Agents.

Tropes associated with this singer include:

"Pieces of Me" starts when Ashlee Simpson is still standing with the microphone at her hip, and she gives an embarrassed "hoedown" and walks off stage.

"Pieces of Me" starts when Ashlee Simpson is still standing with the microphone at her hip, and she gives an embarrassed "hoedown" and walks off stage.