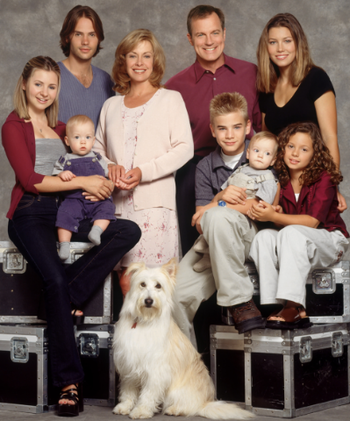 7th Heaven is a drama TV series that aired on The WB (and later its successor, The CW) from August 1996 to May 2007. It followed a pastor, his wife, their seven kids, and their dog. The pastor, a good-natured fella, dealt with the problems of both his family and his flock, which were often related, with varying degrees of success.

This show had an interesting mix of old-fashioned TV family entertainment and Soap Operatics. It stretched the limits of preacher's kids' misbehavior in later seasons.

7th Heaven was the longest-running and highest-rated show on The WB by far, as well as Aaron Spelling's longest-running show. Originally the 10th season finale was the series finale, but the show got renewed for an eleventh and final season.