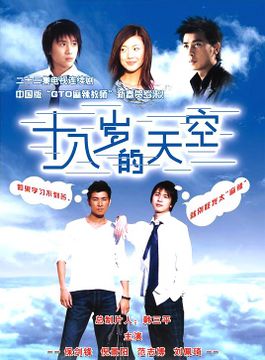 Left to right: Shi Yanfeng, Pei Pei, and Gu Yuetao.
"In this world, there are only two things that are indiscriminately fair. The first of which is that each day has only twenty-four hours. The second, that every person will die some day. Each of you will be facing the college exams at the end of this year, and during this year, I hope each and every one of you will give thought to what kind of person you will be after you leave this school, and become an adult. To each of you, I ask: What is it that you hope to accomplish with your life?"

One of the most well-known high school dramas in mainland China, it stars Bao Jianfeng as the quirky and unconventional Gu Yuetao, a newly hired high school teacher, who is determined to bring out the best from each and every one of his students. He meets challenges in the form of his tomboyish and Mood-Swinger coworker Pei Pei (Ni Jingyang), the somewhat antagonistic student Shi Yanfeng (Li Zhinan), and constant complaints from parents concerning his untraditional teaching methods. Although his students vary greatly in terms of academics and personality, Yuetao helps them in not only an educational sense, but also by establishing a personal connection, helping them see past the horizons of their eighteen-year-old sky.