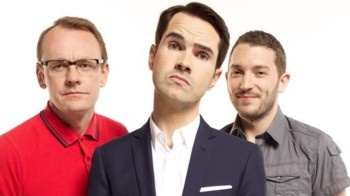 Sean Lock, Jimmy Carr, and Jon Richardson
Jimmy Carr: Here's your question: "Best Way to Make Friends."
Jon Richardson: You tell a woman that you love her, and she says, "I think we're friends"
Advertisement:

There were four rounds in the game up to series 8, which was then reduced to three. Since series 9, a longer version of the show called 8 Out of 10 Cats Uncut is broadcast in the same week as the standard half-hour episode.

Retired rounds (Featured in series 1 and the Big Brother specials)

There's a spinoff called 8 Out of 10 Cats Does Countdown, which is exactly what it sounds like. Jimmy hosts as well with Sean and Jon serving as team captains. Susie Dent and Rachel Riley retain the same roles they had as in the regular Countdown. Whilst originally intended as a one-off as part of a themed night of similar "mash-ups" between other Channel 4 shows, it proved popular enough to become a series in its own right, and has now more or less totally replaced the original, which was demoted to More4note Channel 4's lifestyle-based channel and then moved sideways to E4note their youth channel.